Grand Maltese Gallery is pleased to present “Catharsis” a group exhibition of female identifying artists that utilize photography as a medium for cathartic release and exploration of the self. Curated by artist Brittany Markert, the exhibit will be on view December 2nd through January 13th and will include silver gelatin prints and photomontages handmade by the artists. These artists are connected through their use of isolation, each meticulously staging scenes in their studios/homes/locations in which the star is most often the theatrical self. Through works of the late and genius Lauren Simonutti to emerging and contemporary artists Cornelia Hediger and Brittany Markert, Catharsis presents works that fearlessly address and confront the depths of our inner dialogue and celebrates photography as a medium to channel the subconscious and express an ongoing narrative.

Lauren E. Simonutti (1968- 2012) received a BFA in Photography from the University of the Arts in Philadelphia. Her handmade limited edition photo books date from 1997 and her exhibition history dates from 1996. In 2009 she joined Catherine Edelman gallery in Chicago and exhibited her series “8 rooms, 7 mirrors, 6 clocks, 2 minds & 199 panes of glass‚” in 2010. Awards include the Baker Artist Awards in 2012 for photography.

(Prints on loan from personal collection of Feldschuh Gallery)

Cornelia Hediger (b. 1967) is a graduate of the Mason Gross School of the Arts, Rutgers University, with a Masters in Fine Art. Her exhibition history dates from 1999, including exhibitions in the US, Canada, France, Switzerland, Italy and Germany. Her photographs have been reproduced in publications such as PHOTO+, HotShoe Magazine, Snoecks, ARTE, and Photonews among others. Awards and accolades include a PDNs 30 in 2009, and more recently, a Silver Award in the 2016 Tokyo International Foto Awards.

Brittany Markert (b. 1987) is a graduate of Mathematics from Santa Clara University. She moved to New York in 2012 and enrolled in a traditional black and white printing workshop at the International Center of Photography. Her exhibitions date from 2012 and she has shown in US, Denmark & France. Her ongoing photographic narrative, In Rooms, is published as a limited edition chronological photo book every 2 years. The first volume was released in 2016 and the 2nd is due to come out in early 2018.

Madness strips things down to their core. It takes everything and in exchange offers only more madness, and the occasional ability to see things that are not there.

03.28.06 There were so many beginnings I had to choose one, and since this is a story of anniversaries 03.28.06 seemed the most appropriate. That is the day I began to hear voices. Three of them, quite distinct. Two are taunting and the third voice is mine, as I have heard it externally, on a tape recording or answering machine. That voice has some reserve, it seldom makes itself heard. The others are a constant. They all live in my right ear which rather makes sense as I spontaneously went deaf in that ear a decade ago and it has been vacant ever since. As time and treatment progressed they have stopped screaming and contribute only a dull murmur. Except at bedtime, at bedtime they like to sing. It presents itself as a sing-song - Rapid cycling, mixed state bipolar with schizoaffective disorder.

The problem with madness is that you can feel it coming but when you tell people you think you are going crazy they do not believe you. It is too distant a concept. Too melodramatic. You don’t believe it yourself until you have fallen so quickly and so far that your fingernails are the only thing holding you up, balanced with your feet dangling on either side of a narrow fence with your heart and mind directly over center, so that when you do fall it will split you in two. And split equally. So there’s not even a stronger side left to win.

I began to break time down.

This would be the math:

I would anatomize it further but it might make me appear obsessive.

The misfirings of my beloved/despised mind that conspire to convince me to destroy all have rendered me housebound and led to a solitary life. A creature of past, proof, memory and imaginary friends, I am aware enough to know the things I see and hear are not real, but that does not mean I do not still see and hear them.

Over three and one half years I have spent alone amidst these 8 rooms, 7 mirrors, 6 clocks, 2 minds and 199 panes of glass. And this is what I saw here. This is what I learned.

She Knew The Game was Fixed but Played Anyway, 2007 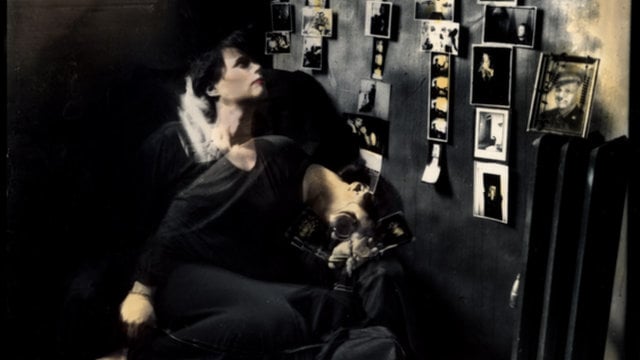 Catharsis featured in the Best of New Orleans